There are approximately 1,373 Acacia species distributed throughout tropical and warm areas of the world. It is possible to find 955 species in Australia, 185 species in America, 144 species in Africa, and 89 species in Asia (Al-Assaf et al. 2007). Many of these species produce and exude gum. This gum is a polysaccharide hydrocolloid with many practical uses. Sudan is currently the largest gum producer in the world with a gum Arabic belt zone of approx 520,000 km2 (Nussinovitch 2010). Acacia Senegal and Acacia Seyal are the most commercially exploited species and referred to as gum Arabic.

The gum formation occurs in the cambial region of the stems or branches by a process named gummosis. The tree must be 5 years and older for gum production to happen. The exudation can be caused either by natural causes such as heat, drought, and attack by insects or pathogens or by injuries caused intentionally (tapping). Distinctively, in Sudan gum Arabic tapping process is well established, and it is carried out by farmers during the dry season (November/December). The gum yield is influenced by environmental circumstances as rainfall or maximum temperature and also by harvesting conditions like the time of tapping or its intensity. Superficial incisions are commonly made on the branches by using axes, but a more sophisticated tool, called a sonki (sharp spear), is available (Elrayah et al. 2012). The gum is exudated as sticky fluid and grown up to 1.5–7.5 cm in diameter and gradually dried and hardened in the sun and collected in the wound within 4–6 weeks depending on the weather condition. The tapping is done once a year, although in some areas there are two tapping seasons. However, it has been suggested that a second tapping has a significant damaging to the health of the trees (Elrahay et al. 2012: Al-Assaf et al. 2012); therefore one tapping season with more than one picking is recommended.

The production of gum Arabic suffers large seasonal fluctuations depending primarily on the weather and also on its price. The production and trade of gum Arabic is dominated by Sudan, accounting for 80–90 % of the world market (Chikamai et al. 1996). Nigeria is the second largest producer and exporter of this hydrocolloid. The production of gum Arabic in these regions faces a number of problems, such as weather conditions, plagues (e.g., locusts), scarce funding for smallholders, and political instability. However, the production in Sudan has been estimated between 25,000 and 95,000 ton, averaging 50,000 ton per year (Williams and Phillips 2000). Other African countries as Ethiopia, Tanzania, Cameroon, and Senegal produced and exported volumes below 1,000 ton a year.

The gum is frequently exported raw, and only manual cleaning, sifting, and sorting operations are carried out to remove large impurities that could occur. Clean, large, and light color nodules make the handpicked selected (HPS) grade. This grade is the most expensive and tends to be of highest quality compared to the rest of the gum (Al-Assaf et al. 2012). Also, gum Arabic is processed at industrial scale by companies such as Dansa Food Processing Co. Ltd in Nigeria, or Sanimex in Chad, or Khartoum Gum Arabic Processing Co (GAPC) in Sudan. These companies produce spray-dried gum Arabic powder of various grades for direct use without further processing, and it is exported to global market. The international market for gum Arabic has been usually unstable, due to an increasing demand, social and political volatility in the producing regions, and large variability in price, quality, and supply. Europe (France, the United Kingdom, Germany, Italy, Belgium, and Ireland) is the biggest importer of gum Arabic second largest market. France and the United States are the mayor countries for both importing and reexporting gum Arabic products (Verbeken et al. 2003).

Partially dried nodules of gum Arabic are collected manually on multiple harvests every 2 weeks. A yield of 0.5–2 kg is obtained per tree annually, although production may range from few grams up to 10 kg (Elrahay et al. 2012). The collected gum is cleaned manually, usually by women who remove foreign matter and sort the gum according to the size of the pieces.

Gum Arabic originating from the Acacia Senegal and the Acacia Seyal is recognized by the Codex Alimentarius (food additive E414). The gum is safe for human consumption based on a long history of usage as well as toxicological studies. The exudate is also used in nonfood applications, such as: pharmaceuticals, cosmetics, textiles and lithography, and minor forest products (Wang and Anderson 1994).

Gum Arabic contains no pathogens and no more than 103 microorganisms per gram (Blake et al. 1988). Because of the high temperatures involved, spray-dried preparations contain no more than 40 % of the usual microorganism count (4 *10² microorganisms per gram). The number of viable bacteria contained in the gum can also be reduced by treatment with ethylene oxide (no longer permitted for food use), or propylene oxide (less efficacious). Heating carried out during manufacture to reduce the microflora can lead to precipitation of the arabinogalactan protein complex (Anderson and McDougall 1987a), which promotes stabilization and emulsification in a range of food products (Randall et al. 1989).

Recent European Community legislation has approved gum Arabic as an ingredient which can be labelled as a food dietary fiber. This recent change has created an opportunity and demanded for A. Seyal due to its lower viscosity, which can be used at higher concentration compared to A. Senegal. The low viscosity is due to its highly branched structure and therefore can be dissolved up to 50 % (wt %) to produce a solution of moderate viscosity.

Acacia Senegal is a deciduous shrub, growing to 15 m tall and usually branched from the ground. Branches fork repeatedly and in mature trees commonly form a rounded, flat-topped crown. The trunk may vary in diameter up to about 30 cm. The bark is greyish-white, although in old trees growing in the open it may be dark, scaly and thin, showing the bright green cambium layer just below the surface if scratched with a nail.

The slash is mottled red. Powerful hooked thorns, 3-5 mm long, with enlarged bases appear at the nodes of the branches, usually in 3s. They are sharp, with some pointing forwards and others backwards. Leaves bipinnate, 3-8 pinnae (glands between uppermost and lowermost pinnae); rachis up to 2.5 cm long; pinnacles are pairs of 8-15, green; 2stipular spines strongly recurved with a 3rd pseudo-stipular between them. Flowers yellowish-white and fragrant, in cylindrical, axillary pedunculate spikes, 5-10 cm long; calyx of each flower has 5 deep lobes, 5 petals and a mass of short stamens; pistil inconspicuous.

Varietal differences in A. Senegal are based on variation in natural distribution as well as differences in morphological characteristics such as the presence or absence of hair on the axis of the flower spike, colour of the axis, shape of pod tips, number of pinnae pairs, occurrence of a distinct trunk and shape of the crown. Four different varieties of Acacia Senegal are recognized: var. Senegal, var. kerensis Schweinf., var. rostrata Brenan and var. leiorhachis Brenan.

The generic name ‘acacia’ comes from the Greek word ‘akis’, meaning a point or a barb.

Acacia Senegal is presumably insect pollinated. Flowering starts from June to July in Sudan, December to January in South Africa, February to March in Pakistan, and August to December in India. Fruits ripen in January in Burkina Faso, July-September in Kenya, August in Pakistan, October in South Africa, and November-December in southern and central Niger. The wind shakes seeds from the dehiscent pods, and sheet wash and grazing animals may extend the seed dispersal range.

Drought-tolerant, A. Senegal is the characteristic species in the drier parts of Anglo-Egyptian Sudan and the northern Sahara and is to be found throughout the vast area from Senegal to the Red Sea and to eastern India. It extends southwards to northern Nigeria, Uganda, Kenya, Tanzania and southern Africa. In India it is found chiefly in Sind and Ajmere. In Sudan, the tree both exists in the wild and is cultivated – mainly on sandy hills, but it also grows well in cotton soil.

Acacia Senegal is associated with a wide range of vegetation types, from semi-desert grasslands to Anogeissus woodlands. It prefers clay plains and rocky hill slopes. It can easily become a serious weed. South Africa and Australia have policies against further introduction of this noxious weed. 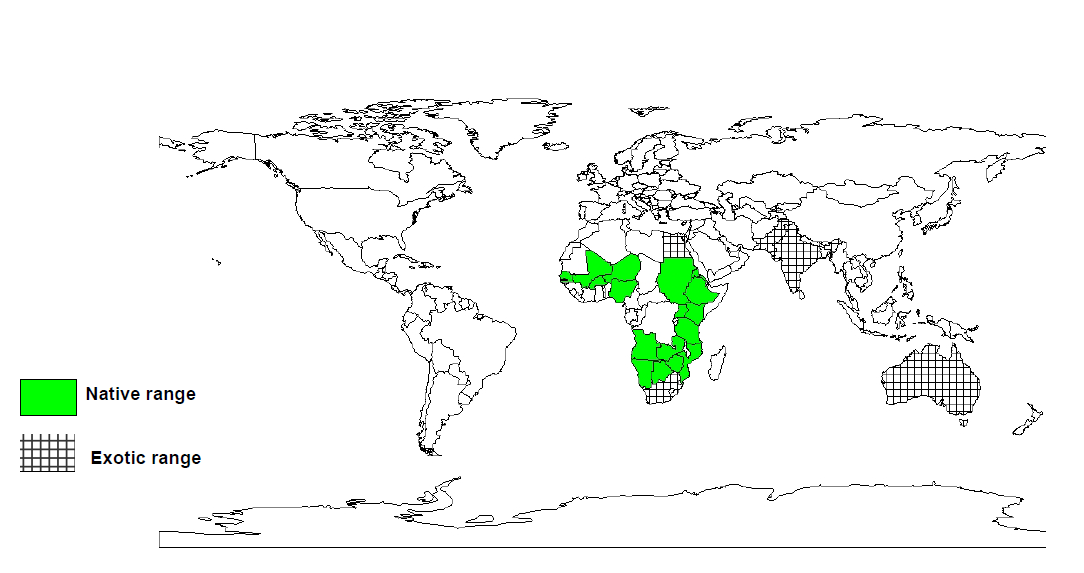 Weeding should be immediate in the season following planting and for the following 2 growing seasons. Protection of young trees from livestock browsing is essential. Seedlings are rather slow growing with initial annual increments of 30- 40 cm. For firewood production, trees can be cut on a rotation of 20 years using coppice with standards, lopping up to 50% of the lower crown in rainy season.